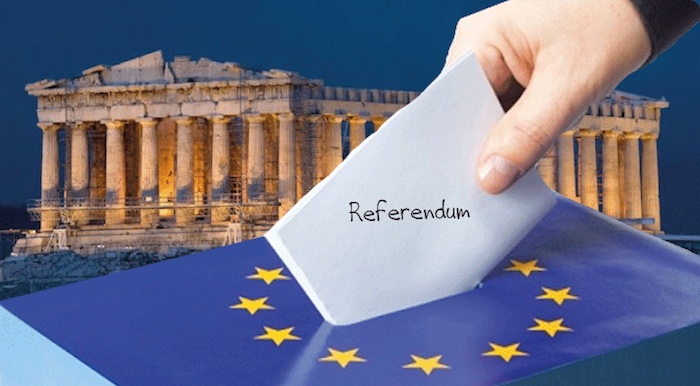 Woke up this morning to find out I must vote on Sunday on the «Reforms for the completion of the Current Program and Beyond» and on the «Preliminary Debt sustainability analysis». I googled them but could not find them. A few hours later I found the documents through the Financial Times, while an unofficial translation in Greek appeared later on in the social media.

Then, I re-read a bit of constitutional referendums theory. The prerequisites for elite-manipulation are painfully present. The most striking characteristic of the proposed snap referendum is that it is more than a snap referendum. It is a surprise referendum. Lack of time for deliberation is more than apparent. Actually there is no time to even realize what is at stake.

The second most apparent characteristic of the proposed referendum is unclarity of the question. Actually if the question remains the agree/disagree with the bailout terms, it still is a textbook example of lack of clarity. Furthermore, if that is indeed the question, will there still be a question by the time of the referendum? Or is it possible that the proposed terms shall be withdrawn? Of course one would say the underlying question is clear enough. But can I be asked to express my opinion on an underlying question?

If the question is a hidden but clear one, that is, remaining in the Eurozone or not, why should I decide within a week? The same applies in case the question would be clear with regard to the Eurozone. Would I have the time to decide? Is there a presumption that I already have decided and what I am asked to do is actually express my pre-existing will next Sunday?

One week for deciding on bailout terms that are written in a language unaccessible to most citizens can only lead to a farsical referendum. Deciding on an underlying question is equally farsical. And if the underlying question is about our country’s place in the EU, I am compelled to compare the deliberation that took place in other member states with regard to their membership with the hurried Greek referendum.

As far as referendums go this is not an expression of deliberative democracy. The next question then is, can holding a snap referendum be constitutional?

According to Art. 44 of the Greek Constitution “The President of the Republic shall by decree proclaim a referendum on crucial national matters following a resolution voted by an absolute majority of the total number of Members of Parliament, taken upon proposal of the Cabinet.  A referendum on Bills passed by Parliament regulating important social matters, with the exception of the fiscal ones shall be proclaimed by decree by the President of the Republic, if this is decided by three-fifths of the total number of its members, following a proposal of two-fifths of the total number of its members, and as the Standing Orders and the law for the application of the present paragraph provide. ”

It is obvious that only the first option is available, since the matter (at least of the proposed question) is clearly fiscal. Can a fiscal matter be put to referendum as a crucial national matter? Furthermore, the Constitution says nothing about time. Given that nothing was ever put to referendum since 1974 there is no referendum practice whatsoever to draw interpretative guidance from. Adversely, the referendum provisions after 30 years of non-use seem to lie in between being dormant or disused. 1

According to the Greek legislation (Law n. 4023/2011) the poll takes place within 30 days following the presidential decree proclaiming the referendum. So what about the one- week plan?

It leaves no time for expert elaboration of the question or for informing the public. No time to deliberate and no time for a serious campaign. Could it be possible that a democratic Constitution allows holding a referendum on a matter of crucial importance a week after it is proclaimed? Adversely, should the constitution prescribe a minimum time for deliberation? Can the importance of the matter be used as an argument for a hurried referendum in the same style as the decree-laws are used to speed up law making at the cost of deliberation in Parliament? And what makes the matter urgent? The failure in negotiations? The sudden realization by the government that it cannot fulfill its promises?

Does merely giving the people a sudden opportunity to express themselves suffice to view this referendum as an expression of democracy? Or would a clear question and an opportunity to deliberate be also necessary?

I can only view the Greek referendum as a sham referendum. However, there could be genuine constituent power at work here.

The question is, can a sham referendum be used as a vehicle for revolutionary change? Are we witnessing a constitutional moment, is the government trying to exercise constituent power? This would be assessed under different criteria.

Had my Prime-minister decided to reject the proposed bail deal, I would have accepted it as a citizen of a representative democracy. The same applies in case he would have signed it. And I shall assess differently a spontaneous expression of constituent power, if I ever witness one.

However, I feel deeply insulted when I am supposed to be taking the decision on Sunday as part of the “people”. I have no time to reflect. No time to change my political predisposition. No time to be convinced by people supporting the opposite opinion. No time to convince anyone. Not even time to stop being sentimental in order make the so-called informed choice. And as a rule I prefer giving answers to straight-forward questions, not implied ones.

I just keep reading Stephen Tierney’s post on ICONNECT explaining what made the Scottish revolution a success. “Thorough regulation of the referendum”, plenty of  time to discuss and reflect upon the issue, a “very clear” question reviewed by the independent Electoral Commission.2 It reads disturbingly like science fiction today and in Greece.