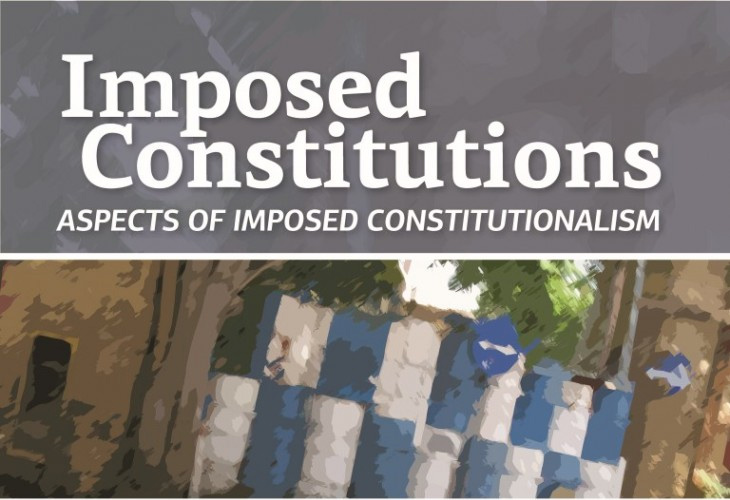 by Yota Negishi, Waseda University; Research Fellow of the Japan Society for the Promotion of Science

First, Jörg Gerkrath (University of Luxembourg), in his paper “Are octroyed Constitutions of the 19th century to be considered as imposed Constitutions?”, examined the “octroyed” constitution resulting from an authoritarian method of constitution-making which is decided unilaterally by the possessor(s) of the de facto constituent power. Second, Richard Albert (Boston College Law School) presented “Constitutions Imposed with Consent?” to show the reality that extraterritorial actors can sometimes be invited to occupy a central place in domestic constitutional law, as regards amendment (Canada), adjudication (Grenada), and interpretation (South Africa). Third, Yaniv Roznai (Radzyner Law School) in his article “Internally Imposed Constitutions” convincingly argued that “all constitutions are imposed”, at least “internally” among old and new generations, and implied the necessity to overcome the Schmittian enemy/friend distinction that makes ‘a People’ anxious about external intervention. The forth presentation “Inter-Venire, Sed Ubi Ire? The Telos beyond the Demos, Ethnos and Nomos in Imposed Constitutionalism” by Zoran Oklopcic (Carleton University) attempted to commence the debate from telos as the most expansive answer to the question: So that what?, rather than demos affected by the external constituent power, ethnos under an imposed post-conflict constitutional settlement, and nomos that ought to govern the behavior of both the interveners and the intervened upon. In the last presentation “Is There Such a Thing as an Imposed Constitution?”, David Law (University of Hong Kong) pointed out that constitution-making routinely implicates multiple authors, constituencies, and narratives in a process involving partial negotiation, dialectic and coercion, and as a more precise and less misleading substitute, proposed “unromantic constitution” that does not fit our idealized notions of how constitutions are supposed to be made.

The second session was titled “Implementing Imposed Constitutionalism”, chaired by David Law and  Yaniv Roznai. Firstly, Dante B. Gatmaytan (University of the Philippines) in his paper “The Philippines’ American Constitution” diagnosed that the apparent approval of Duterte’s actions by people, raising questions about the Filipinos’ commitment to the rule of law and constitutionalism, is a result of the imposition of a constitutional framework that did not evolve from the Philippine colonial experience. Second, “Imposed Constitutionalism v. Popular Constitution-Making? Challenges, Defences and Perspectives” by Costas Stratilatis (University of Nicosia) challenged, retained and refashioned the dichotomy between imposed constitutionalism and indigenous/popular constitution-making, by recognizing the “contextual sensitivity” which may help us understand when and how even an imposed constitution can play a formative role for people-hood. Third, Arianna Piacentini (University of Milan) in her paper “Imposed by whom to whom? Domestic and International Constitutional Dynamics in the Republic of Macedonia” analyzed the allegedly imposed character of the country’s Constitution, with shading light not only on ‘internationalization’ of constitution-making but also on multi-ethnic states where majority-minority dynamics may lead to the same problematic outcomes. In the final presentation “The PouvoirConstituant under the ‘Imposed’ Constitution of Japan: International Revolutionary Power or National Devolutionary Power?”, Yota Negishi (Japan Society for the Promotion of Science) expounded the dynamism of constituent power under the post-war Showa Constitution, which stems from both “international revolution(s)” through accepting Potsdam Declaration in 1945 (and concluding the Japan-US Security Treaty in 1951) and “nationalistic devolution” towards the pre-war Meiji era.

The third session was titled “The Making of an Imposed Constitution”, chaired by Jörg Gerkrath. First, Krzysztof J. Kaleta (University of Warsaw) in his paper “The Constituent Power and Legitimacy of Imposed Constitution” captured the positive function of imposed constitutions in that they facilitate integration and communication within political community, and strengthens the relations between the members of political community. As a similar attempt, Christos Papastylianos (University of Nicosia) in his paper “Constitution Making Process and Constitutional Identity: What is the Meaning of Identity in a Constitution Making Process That Imposes a Constitution?”, argued that, instead of creating a new identity though the procedure of constitution making, imposed constitution can create a new constitutional identity and a sustainable constitutional order afterwards. The third paper “Protestants, populists and territoriality: the Protestant Reformation and the politics of populism in perceptions of constitutional illegitimacy”  by Steve Crawford (Kent Law School) offered a grand historical account, according to which the Papal authority exerts influence over national constitutions/constituted governance and territorial boundaries in Europe by recourse to either its pre-existing de facto constituted power, or the authority granted by the constituent power of all the people of all member states. The final paper “Conceded Constitutions in Europe, 1814-1906” by Kostas Chrysogonos (Aristotle University of Thessaloniki; the European Parliament) paid attention to the practices of European imposed constitutionalism in 19th century, which may serve as cautious lessons to contemporary examples of imposed constitutions.

The fourth session was titled “Imposing Constitutional Principles”, chaired by Professor Richard Albert and  Dr. Alkmene Fotiadou. The first presentation “Legal Theology in Imposed Constitutionalism”  by Antoni Abat i Ninet (University of Copenhagen) raised the fundamental problems of imposed constitutionalism including the inconsistency of idealistic discourse involving a constitutional text, the inability of an imposed text to be enveloped by principles reflecting the nation’s fundamental concepts, and the impossibility to accommodate aspirational principles and other dysfunctionalities related to the interpretation of an imposed text. Second, Manon Bonnet (ILF GERJC Aix Marseille Université) in her paper “The Legitimacy of International and Imposed Constitution-Making in the Context of State Building” discerned “inherent” legitimacy analyzed through contexts of constitution-making processes involving international actors and local authorities, and “built” legitimacy concerning the process of implementation and transition stages. Graham Butler (Aarhus University) next presented his article “Solidarity: A Contributor to Imposed Constitutionalism in a Supranational Setting?”, which asked whether the imposed constitutionalism found in the Europe Union necessitates solidarity to function for integrating states and people in this region. Finally, Cornelia Weiss (Vanderbilt University) presented her paper “Remember the Ladies: Exploring the Relationship between Discrimination against Women and Imposed Constitutions”, which normatively advocated the significance to achieve the elimination of discrimination against women in imposed constitutionalism by empirically examining the practical challenges in US, Japan, Germany and Colombia.

The Conference successfully revealed the variety and complexity of imposed constitutionalism. Admittedly, we may particularize the Constitution of Japan as a textbook “successful” example, which welcomed the 70th anniversary of its effectuation in May 2017 without any formal amendments. However, “imposed” constitutions may be found ubiquitously across the globe if we acknowledge the imposition of values and principles between different actors and levels (international and national, government and people, majority and minority, antecedents and descendants, and so on). Moreover, “imposition” itself does not necessarily carry negative consequences for victim states, but rather may offer a momentum for reflecting the conflicts in the past and bring rays of hope for recovering the distracted constitutional order towards the future. It is no exaggeration to say in this sense that the theoretical and practical problems discussed in this Conference illuminated one of essential aspects of constitutionalism, which shall continue to be called into question beyond space and time.