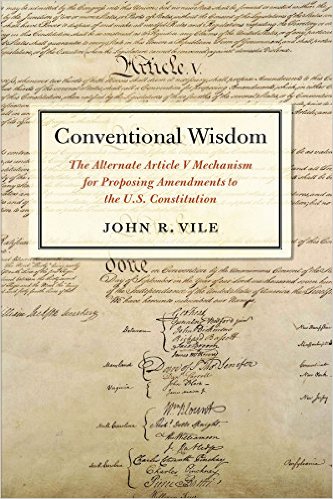 This book is the culmination of more than 30 years of thinking about the unused Article V convention mechanism and related subjects.  I spend the first part of the book exploring the origins of Article V processes and convention precedents in the late eighteenth and throughout the nineteenth centuries.  I also examine early legal commentaries on the subject.  Although I believe the weight of this evidence, including Alexander Hamilton’s comments in Federalist No. 85, suggest that such conventions can be limited, I note that this specific issue does not appear to have been as prominent in earlier legal and political discourse as it is now, and I examine recent arguments both for and against the limited convention option.

On p. 114, I identify six criteria that I think would be hallmarks of a good convention.  They are: attention to the public good; democratic representativeness; rational deliberation; timeliness and efficiency; promotion of governmental and societal stability; and safety for the rights and liberties of the people.  I further attempt to use these criteria when considering the best way for delegates to be selected and to operate.  Although I join previous writers who believe that there are sufficient political restraints on a convention to discount fears of a “runaway” convention, I am concerned that it would be much more difficult for a convention of 435, or 538 delegates (the most likely configurations) to engage in the same kind of deep deliberations as the 55 delegates who attended the U.S. Constitutional Convention of 1787 (one suggestion that I offer is that we might consider a convention of one-third of the larger electoral college totals, assuring each state at least one delegate).

I find that most writings on the subject are based on one of a number of models.  The sovereign delegates model, which John Jameson opposed in the nineteenth century, accepts a convention as a sovereign rather than as a constrained body and is not consistent with the Article V requirement that all amendments be approved by three-fourths of the states.  The state-dominated convention model anticipates that states would be masters of how a convention would operate, even though Article V calls upon Congress to call such conventions when the requisite number of states petition it to do so.  The model of congressional domination would entrust Congress with near total control over Article V conventions even though states petition for the convention, and delegates to the Constitutional Convention of 1787 included the convention mechanism specifically to bypass a recalcitrant or malfunctioning congress.  I advocate a “mixed” or “federal” model that recognizes roles for both states and Congress that I believe is most consistent with the wording of Article V and with American traditions.

I identify a number of possible types of conventions, ranging from: an extralegal or illegal convention that does not follow Article V guidelines; to a single-issue referendum convention; a single-issue deliberative convention; a limited restructuring or updating convention; or a convention to rewrite or replace the Constitution (p. 173).  I see very little advantage, and a lot of time and expense, involved in calling referendum conventions, which would simply vote up or down on the exact wording of an amendment or set of amendments proposed by an individual or group.  By contrast, I see potential in the right circumstances for a convention to deal with a single issue or set of related issues.

I think that an Article V convention would be especially appropriate in three situations.  These are when Congress as a whole is seriously malfunctioning, when congressional rules effectively block consideration of all amendments in that body, or when institutional interests otherwise block consideration of needed amendments.  If reforms of Congress or of the Washington establishment in general are needed, it seems unlikely that Congress will enact them on its own.

I end the book by reviewing proposed legislation on the subject and making my own recommendations.  I think it would be far better to embody procedures in legislation in advance than to leave them to the last minute where questions of procedure would be inextricably tied to perceptions of the desirability or undesirability of the particular amendments under consideration and would be shaped by how to game specific outcomes.