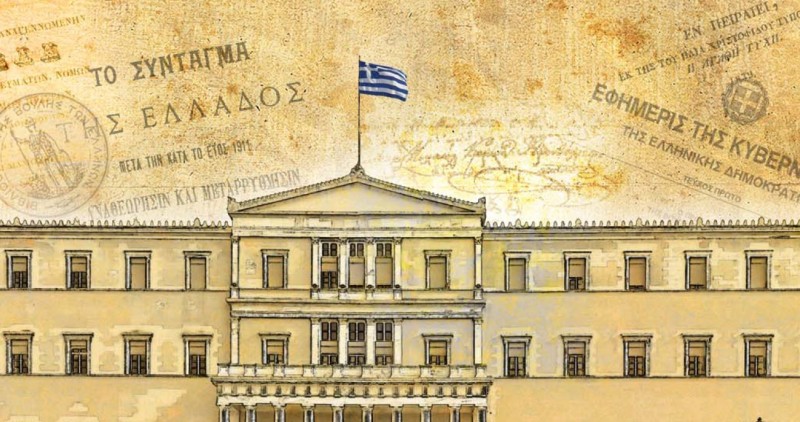 The process proposed is comprised of two novelties, firstly the introduction of popular involvement procedures quite obscure with regard to their potential participants and procedural guarantees, and secondly the probability of an unconstitutional referendum. The broad debate intended to involve the citizens shall be conducted in all municipalities of the country, with the participation of civil society, and shall be organized by a fifteen-member Committee (composition to be announced) probably leading to a referendum. What does this probability signify?

The procedural limits set by Art. 110 para 2-6 of the Greek Constitution are very strict. Constitutional revision takes place in two phases, between which general elections are held. The amending process has no influence over the timing of general elections. During the first phase the need for a constitutional revision is ascertained by resolution of Parliament, adopted following the proposal of at least 1/6 of the members of Parliament either by a three-fifths majority or by an absolute majority of its members in two ballots, held at least one month apart. This resolution defines specifically the provisions subject to revision. During the second phase, the next Parliament amends the provisions that are to be revised. In case a proposal for amendment of the Constitution receives the absolute majority of the votes of the total number of members, but not the three-fifths majority, the next Parliament shall proceed with the revision of the proposed provisions by a three-fifths majority of the total number of its members, and vice versa. Revision of the Constitution is not permitted before the lapse of five years from the completion of a previous revision.The material limits exclude from revision (among others) the provisions defining the form of Government.1

It is clear that the Greek formal amendment rules do not include the possibility of a  constitutional referendum. Furthermore, according to Art. 44 of the Greek Constitution the President of the Republic proclaims by decree a referendum on crucial national matters, following a resolution voted by an absolute majority of the total number of MP’s, taken upon proposal of the Cabinet. This is clearly unrelated to the amendment formula and any attempt to mix up such a referendum with the steps set out by the formal amendment rules would be in violation of the Constitution.

It is true that the current amendment formula does not require strong popular involvement. The amending power is vested in Parliament and the people take part only though their vote in the general elections, which as a rule are not dominated by the amendment proposals.  Pursuing a more deliberative process could strengthen constitutional faith. Popular deliberation on potential constitutional amendments can indeed render the process more meaningful. Nonetheless, formal procedures involving active citizens, NGOs, civil society etc., aimed to replace the “procedure confined within the walls of Parliament”2, could prove quite problematic. In case the result of such consultation would have any kind of bindingness, even as a novel source of legitimacy, questions with regard to procedural guarantees are bound to emerge. Is there going to be an Irish-style random selection of citizens, who will have a role in drafting the new rules of the game? What’s more, in case the whole process results in a referendum how is this compatible with the formal amendment rules in place? And why indeed the probability of a referendum? Will it be a snap referendum, like the 5th of July Grexit referendum? It would be fair to say, anyone who considers this unconstitutional, undemocratic referendum a success is ill-equipped to design referenda that aim to contain elite-manipulation and allow genuine popular expression.

The plot thickens when the proposed innovations of the amendment procedure are read in conjunction with several of the proposed amendments. Emphasis is placed on the use of referenda and popular involvement. Any concession of sovereignty shall require approval by referendum. Popular initiative shall be introduced. The threshold for “matters of national importance” shall be 500.000 signatures, for abolishing legislation passed by Parliament 1.000.000 signatures and for introducing new legislation on any subject-matter 1.000.000 signatures. The President of the Republic shall also be directly elected by the citizens in case two votes within the Parliament fail to produce result. This is designed to address the automatic dissolution of Parliament after the failure of the third vote. Nonetheless, this proposal is also accompanied by the proposal for a “reasonable” enhancement of the presidential powers. The combination of the proposed changes would pose an almost impossible challenge to a constitutional designer who would wish to remain within the confines of a representative parliamentary system. Nonetheless, this is dictated by the material limits of the Greek Constitution that entrench the form of government.

Is what is proposed then an exercise of constituent power to achieve a regime change? The incumbent government is composed by the left wing “Syriza” party, that won 35,46% of the vote and its right wing partner the “Independent Greeks” party, that won 3,69% of the vote, in the last general elections. While it is far from certain that Syriza will win the next general elections, even the current political landscape as reflected in Parliament does not suggest the wake of constituent power and that the people united will claim a regime change through a constitutional revolution. Thus, the suggested violation of the procedural and material limits must be evaluated for what it actually is, that is, an unconstitutional constitutional revision. The fact that it is presented as a mere possibility renders the grounds for negotiation unstable. How can the designated actors of constitutional change begin negotiations on the list of proposed changes and find common ground when a sudden change of the rules of the game is very possible?

At this point discussion on the merits and shortcomings of the proposed list of amendments is fettered by this uncertainty. The expressed hostility toward experts referred to as a “technocratic elite” creates suspicion against critics of this “democratic revolution”.3  Still, can enhancing popular involvement in the Greek constitutional revision be sought without at least considering the lessons tought by the Irish Constitutional Convention and the Icelandic crowd-sourcing experiment? Can direct-democratic processes be enhanced without reflection not only on the Greek recent referendum, which is a bad example of referendum practice, but also on the Brexit referendum which, having been conducted in accordance to the rules, has much to say about the use of referendums in parliamentary systems? Can popular initiative be introduced without reflection on possible safety valves for the protection of constitutional rights and liberties?