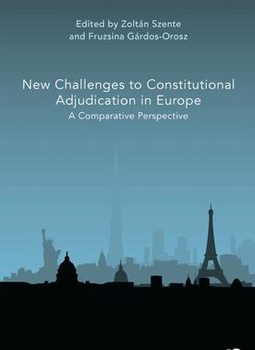 This new book, edited by two prominent Hungarian constitutional scholars, Zoltán Szente and Fruzsina Gárdos-Orosz examines how the most exigent social, economic and political challenges affect constitutional adjudication at both national and European levels. More precisely, the research question was whether the most recent global challenges, such as the world economic crisis, the new wave of international terrorism or mass migration have changed the well-embedded judicial constructions or, in general, the jurisprudence of constitutional and supranational courts. For this purpose, the constitutional adjudication of ten European countries (Croatia, France, Germany, Greece, Hungary, Italy, Poland, Portugal, Spain, and the United Kingdom) is discussed by distinguished national experts in the analytical framework presented by the editors. The selection of these countries was certainly not accidental ‒ they all have been deeply affected by these (and other) challenges. Nevertheless, they have different constitutional cultures and institutional settings, and they have had to face partly different challenges, or the same problems in different ways. In addition, the book explores the relevant case law of the Court of Justice of the European Union and the European Court of Human Rights.

All these cases were analysed in the dimension of changeability/stability of constitutional jurisprudence, whose criteria were defined by the editors. The sixteen authors of the book examined not only whether the constitutional court had retained the old interpretative tools and judicial constructions, but they also sought to determine the causes of change or stability.

As a result of this wide-ranging analysis, Szente and Gárdos-Orosz classify the examined countries into three categories according to the extent to which the relevant constitutional case law has changed. In their assessment they have found that the crisis-driven jurisprudence of the constitutional court changed to the greatest extent in France and Spain, as in these countries the constitutional tribunals had to face and resolve unaccustomed problems. In some other countries, including Italy or Portugal, constitutional adjudication shows signs of both continuity and change. This means that, as the editors argue, “although in some areas the Constitutional Court has developed new doctrines in response to crises, in other respects it can be characterised by continuous practice preserving the validity of the earlier constructions and interpretive patterns”. Finally, there are some constitutional systems where the constitutional court has preferred stability and continuity in its crisis-related jurisprudence and the well-established methods of constitutional interpretation proved to be appropriate to handle the new challenges (in Germany, for example).

Besides establishing these clusters, Szente and Gárdos-Orosz strongly argue that there are some national pathways where the deep changes in constitutional case law were caused not by global challenges, but by different reasons. Thus, in Hungary and Poland, the jurisprudential changes were not really motivated by the responses to the problems examined by the book, but “by the shift towards authoritarian governance that shocked the position of the constitutional courts”.

As to the European scene, the related practice of the supranational courts cannot be grouped into the categories Szente and Gárdos-Orosz proposed for the national jurisdictions. Still, the identified judicial behavioural patterns are interesting contributions to the topic under review, and show how unpredictable the case law of these courts is.

This book is a serious contribution to the present-day academic literature on European constitutional adjudication and to the study of multilevel constitutionalism.

Chapter 4: Remarks on the case-law of the French Constitutional Council in relation to new challenges – Fabrice Hourquebie

Chapter 5: Beware of disruptions – The Bundesverfassungsgericht as Supporter of Change and Anchor of Stability – Veith Mehde

Chapter 6: From submission to reaction: The Greek Courts’ stance on the financial crisis – Apostolos Vlachogiannis

Chapter 14: New challenges for constitutional adjudication in Europe: What role could the ‘dialogue of courts’ play? – Tania Groppi

Chapter 16: The crisis, judicial power and EU law: could it have been managed differently by the EU Court of Justice? – Márton Varju