Peter Leyland, The Constitution of the United Kingdom. A Contextual Analysis (Hart Publishing 2016): A view from the outside. 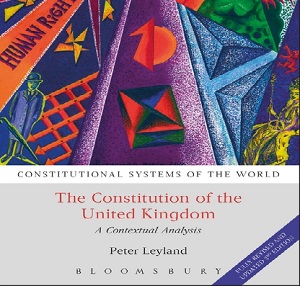 Knowledge of the context within which constitutions are designed, operate and evolve is crucial for the accurate use of comparative methodology. Still, notwithstanding the growth of comparative constitutional law, access to information about the contextual environment of constitutions is often limited, which in connection to language barriers sets serious obstacles to fruitful comparison. The “Constitutional Systems of the World” book series by Hart Publishing offers invaluable help for surpassing such obstacles, since it includes books dealing with distinct constitutional orders and providing a comprehensive analysis of the big C and small c constitution of each country.

One of the most difficult to comprehend constitutions for non-native scholars is perhaps the Constitution of the United Kingdom.  A few years ago Professor Sir Jeffrey Jowell, giving evidence before the Constitution Committee, chose not to offer a working definition of the constitution, stating that “When you examine legislation, you know what is constitutional. We may not be able to define it, but when we see it, we know it.” 1

The concept of a constitution that cannot be found in a single document with distinct written and entrenched provisions, constituting the higher order law of the country, tests the common assumptions about constitutional law and constitutional change. In so doing, the UK Constitution offers interesting lessons for comparatists, providing a conceptual lens through which traditional dipoles such as entrenched/unentrenched, formal/informal constitutional change, rigidity/ flexibility can be questioned and revisited.

Peter Leyland’s book “The Constitution of the United Kingdom: A Contextual Analysis” updated in 2016, taking into considerations recent developments in UK constitutional law, is an excellent guide into the intricate paths of UK Constitutional Law. Starting off by addressing the problem of unwritteness/lack of codification, Leyland chooses not to distinguish between the two, but rather treats them as corresponding the one key characteristic, that is, the absence of a single document.

The book examines the role of the Crown, the role of the Parliament and the role of the executive, the role of the judiciary, local government, devolution issues, and  rights issues, providing a clear account of how they work, but also of the ways they might change, and summarizes the current debates. To evaluate a book which aims to provide a comprehensive and contextual analysis of a constitutional system within a limited number of pages, three questions are useful:

1. Does the book offer a full constitutional profile to a non-native scholar, who is not familiar with the particularities of the legal order?
2. Is the book an interesting read for those who have a profound knowledge of the analysed legal order?
3. Is the book useful for understanding specific issues and answering novel constitutional questions?
Leylands’s book does all the above very successfully.

Recently, British Constitutional Law seems to be going through its 15 minutes of fame, that may be prolonged perhaps for quite a while. Brexit has created the context in which many people across Europe, whose rights could be strongly affected, are trying to figure out complex issues regarding the royal prerogative and parliamentary supremacy. British constitutional flexibility is put to test: shall it prove to be an asset or a problem?

For the time being, unpredictability appears to stem from flexibility. Leyland’s book provides all the necessary tools for understanding the ongoing battles over triggering Art. 50, and also what is at stake including the protection of rights and evolution. More than that, it offers the tools necessary for forming a personal opinion on the issues as well as arguments. In that sense, the book fulfils the prerequisites set forth by the third question.

At this point it is hard to predict what amount of constitutional change will occur in the UK. Time accelerates during moments of profound constitutional change and the UK is faced with the possibility of such change. Reading Leyland’s contextual analysis of the UK Constitution one cannot help but wonder what its next edition will look like.