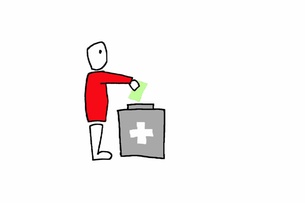 On November 25, 2018 three proposals were up for decision by the Swiss electorate. Two of them were pertaining to constitutional change and can be said to be situated at either of the poles of constitutional importance:

Again both, the Federal Council and the Federal Parliament recommended rejecting the initiative. They argued that its adoption would harm Switzerland’s credibility and reputation as an international partner, that it would create legal uncertainty and instability, that it amounts to an obligation to break international treaties and that it constitutes a solution to a non-existing problem, because the supremacy of the Federal Constitution is already granted in the current legal framework. In a surprisingly clear verdict the majority of the people (66.2%) and the majority of the people in all of the 26 cantons rejected the constitutional proposal. The turnout was 47.7%.

The initiative pursued the objective of increasing or at least maintaining the (steadily decreasing) proportion of horned cows and goats in Switzerland. This was to be achieved by granting federal subsidies to people keeping horned cows and goats. The amount of the financial support as well as the type of financing was left open by the proposed constitutional amendment.

Both the Federal Council and the Federal Parliament recommended rejecting the popular initiative, arguing that it would do more harm than good to animal welfare. As horns increase the risk of injuries, horned cattle is usually kept tethered in the stables. Therefore the initiative, according to the opinion of the Government, may have had the consequence of reducing incentives for loose-housing systems to the detriment of animal welfare. The initiative was rejected by a majority of 54.7% of the people and the majority of the people in 20 cantons. The turnout was 46.7%.

The comments that can be made on the proposal are threefold:

Finally, there was a third federal vote on a subject related to statutory amendments, namely a decision on a modification to social security law. The statutory amendment was triggered by a decision of the European Court of Human Rights (ECHR): Vukota-Bojić v. Switzerland (Application no. 61838/10). The Court found that Switzerland did not have a clear and detailed legal basis for conducting undercover observations of people suspected to fraud invalidity insurance and accident insurance. As a consequence the Federal Parliament at very short notice elaborated and decided upon new statutory provisions, which could serve as a legal basis for such observations.

A committee of citizens had taken the referendum against the statutory amendment, arguing that in case of enactment of the provisions the scope of action of detectives commissioned by insurance companies would reach further than the powers of the police and the intelligence service. They feared that GPS trackers and drones could be used for surveillance and that video and audio recordings could be made of all publicly accessible locations. The Federal Council and the Federal Parliament countered that observations may only be ordered if there are concrete indications of unlawful receipt of insurance benefits and if the facts of the case cannot be clarified by other means or only with disproportionate effort. According to the intention of the Federal Council and Parliament, for example, no drones may be used to film the interior of an apartment.

The new provisions were welcomed favourably by the electorate – a majority of 64.7% of the people accepted the amendments.