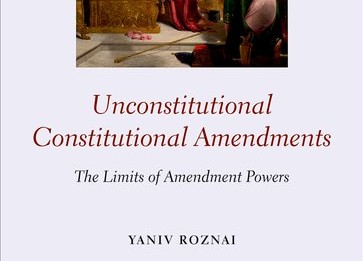 The first thing that strikes the eye in this revised and updated version of Roznai’s doctoral thesis is the cover image: Richard Westall’s Sword of Damocles. Perhaps a spoiler to the sharp-eyed reader, it captures the dread of the amendment power and the bitter sanction it faces, which is placed atop menacingly by an anterior, and presumably superior, authority. Setting the scene thus dramatically, Roznai proceeds to demonstrate in what different ways this has come to be the case.

Part III examines the judicial enforcement of constitutional unamendability. Employing the theory of delegation and foundational structuralism advanced in Part II, he provides a defence for substantive judicial review of constitutional amendments, even in cases where the constitution does not explicitly authorise the courts and regardless of whether there is explicit unamendability. He argues, among other things, that it is the judiciary’s role to uphold the vertical separation of (the primary and secondary constituent) powers (chapters 7 and 8). He also holds that the intensity of judicial scrutiny should increase where the amendment process is designed closer to ordinary legislative power, and proposes guidelines as to how courts should conduct a “foundational structuralist interpretation” and as to the standard of judicial review (chapter 8). Roznai is careful to separate the question of the constitutionality of constitutional amendments and its judicial enforcement, even if they are closely related issues. Although he does not dwell on it much, he seems to acknowledge that unamendability can be a political check too.

Undoubtedly, the book provides a wealth of advanced arguments in justifying the limitations on constitutional amendments. It will open up interesting lines of debate regarding, among others, constitutional identity, the legitimacy of judicial review, and constitutional design of amendment rules. In this instance, I shall highlight only two somewhat related points.

Firstly, Roznai bases his conception of the constitution upon an understanding that it is a coherently meaningful structure that manifests the will of ‘the people’. In justifying unamendability, his point is to defend democracy at a very fundamental level. He sacrifices the will of the contingent democratic majority for the greater good of protecting the foundational democratic decision underlying the constitution. He claims that “[u]namendability is … the ultimate expression of democracy” (p. 196). The limitations on the amendment power, accordingly, simply uphold the more fundamental democratic act of the primary constituent power, serving to preserve the ‘constitutional identity’. Roznai’s foundational structuralism argument thus seems to be indifferent to the substantive content of the constitutional identity, but requires the protection of any constitutional identity as adopted by the primary constituent power. Therefore, just as the principle of human dignity can be an unamendable principle in a constitution, the disenfranchisement of an ethnic minority can be an unamendable principle in another—both worthy of protection from the infringement of the amendment power. Foundational structuralism thus does not seem to entail normative considerations as to the content of protected principles. Yet, in his defence of unamendability, Roznai refers at times to democratically “desirable” and “undesirable” principles, (pp. 191-92) and to the “protection of basic rights” (p. 214). It is not entirely clear what democracy requires. For example, Roznai claims that the unamendability of the rights of trade unions in the Portuguese constitution is not a precondition for democracy (p. 192), but this could be challenged by certain strands of radical democracy or from the perspective of social rights constitutionalism. At one point, there is a reference to the co-originality thesis, but only lightly (p. 232). An explanation of where the book’s conception of constitutional democracy is grounded and what it regards as preconditions for democracy would have bolstered the general argument.

Secondly, there is a missing element with regard to justifying the book’s somewhat positivistic approach to constitutionalism. Roznai argues that even natural law and international law constraints on the amendment power are valid only if they are constitutionally recognised (p. 81). The state constitution thus seems to be the reference point for legal validity. This assumption, however, calls for a discussion of the legitimacy of the constitution. The state constitution, unlike constitutions of other organisations, has a comprehensive claim to govern everything under the state’s jurisdiction and does not allow opt-outs. The strength of the argument for the preservation of certain aspects of the constitution against fundamental changes through the institutions it creates, depends upon establishing what legitimises such an all-encompassing constitution. Roznai relies on ‘the people’ as the holder of the primary constituent power. However, he does not explain why and how this is the case. Is the sovereignty of ‘the people’ a natural law principle, or is it sheer force? Or is it simply a reference to a non-dynastic source of legitimacy? Furthermore, is it really ‘the people’ willing and speaking as one in this exercise? There is, at best, a degree of representation in the exercise of the primary constituent power. Therefore, it might not be as crucial as claimed that fundamental constitutional changes are decided by the supposedly unbound primary constituent power. It might even be the case that the amendment power is better placed in the name of ‘the people’, as it can work in a more orderly, more deliberative, and possibly more transparent and inclusionary manner with an institutionalised representative role—as long as it is not obstructed by the ‘constitutional identity’. One should keep in mind that the Sword of Damocles may not be, or indeed may never have been, in ‘the people’s reach. An explanation of why the state constitution is at the centre (or beginning) of normativity would have clarified the link between ‘the people’ and unamendability.